CAUTION: WEB SITE UNDER CONSTRUCTION ON SOME PAGES.

WHO IS SUGGESTING THIS IDEA? 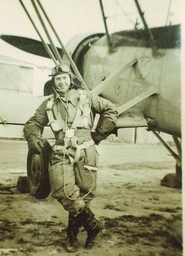 One question many marketing experts always ask, is who is suggested this idea. The best way I can answer that is with links to my own web site pages that might give you some idea as to why I would like to be captain of the first airship to do a true circumnavigation.
See: www.hybridairship.net  and look at the sailing or CV pages.
Looking at those pages should indicate that my interest in an airship circumnavigation is more than just financial, but because I like crossing big oceans the slow way. 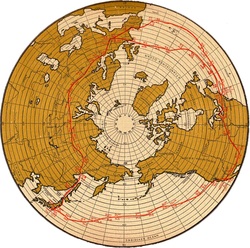 Circumnavigation record requirements.
For powered aviation, the course of a round-the-world record must start and finish at the same point and cross all meridians; the course must be at least 36,788 km (22,859 mi) long (which is the length of the Tropic of Cancer). The course must include set control points at latitudes outside the Arctic and Antarctic circles.
More on circumnavigation:  http://www.solarnavigator.net/circumnavigation.htm
THE DIFFERENCE:
WELTFAHRT: 21,250 miles  CIRCUMNAVIGATION:  22,859 miles = 1609 miles too short.


This means the airship circumnavigation record is unclaimed and it is one of the few aviation world records left.

SKYSHIP 600 AND WHY IT IS THE BEST BLIMP AVAILABLE 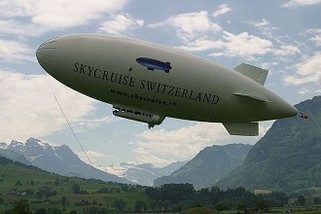 
The other main reasons for choosing the Skyship 600 are, that it is a very tough reliable airship and can survive extreme conditions in flight or on the ground far better than other airships. It is also easy to modify and convert the gondola for new diesel engines, long range fuel tanks and other equipment for the circumnavigation. It is also has a large cabin and a good vectored thrust system.
The Skyship 600 has also proven to be very capable of enduring difficult desert conditions during the first trans Australia, operated in the very low temperatures of a South Korean winter, flown many passengers around the Swiss Alps and one is currently operating all year for the military in tropical Trinidad. It is very much a blimp for all seasons.
STOP PRESS: Hybrid Air Vehicles Ltd (www.hybridairvehicles.com) is going to build a new version of the AT10 with 155hp 2.0 Centurion diesel engines and although this is a smaller blimp than the Skyship 600, it does have the range to do a circumnavigation. Like the Skyship 600 the AT10 was designed by Roger Munk. For more information on the new AT10 see:  http://www.hybridairship.net/new-at10.html

The main advertising sponsor would decide which of 3 main routes to select and where the start and finish line is, based to some extent on hangar considerations and timing, normally London, New York or Tokyo. The main choices are:
1/ GRAF ZEPPELIN This route can be extended with a few detours to South Korea and Florida, so the total distance is correct for a circumnavigation and is less costly than the other routes. The start could be in San Francisco, New York, London or Friedrichshafen.
2/ WESTBOUND Trade winds route, across Southern US, Galapagos, across the South Pacific to North Australia, South Africa to Trinidad. This would be quicker with a New York start line. This route is not advisable during an El Nino, due to out of season typhoons, increased thunderstorm activity and lack of tailwind component.
3/ EASTBOUND R101 route across the Med to Egypt, Dubai, North India, Indonesia, Japan, North Pacific, United Sates.
The start could be in New York, London or even Tokyo.
DETOURS FOR LANDMARKS Some detours to include capital cities and landmarks of interest can be included, but the best weather related, seasonal timing must be maintained. Most routes involve a one year contract.
At the present time I would guess that a start just before the Olympics from London via Friedrichshafen with a one year tour including visits to extra cities in the US would be the most popular with potential customers for the main envelope advertising contract.

For a circumnavigation to be a safe and sensible, it must be planned and executed in such a way that every leg is flown at a time of  year that offers the best possible wind component and weather conditions. For example, it would not be advisable to try and cross the North Atlantic during the winter, India during the monsoon season, South Pacific during typhoon season and the North Pacific anytime except mid to late summer. There are a few ways of dodging some weather issues, like the desert sections of the middle East can not normally be crossed during the summer months, but that restriction only applies to daytime flights, so the desert can be crossed duríng the night and if a stop is required then the airship can be sprayed with water during the heat of the day to avoid helium loss.
In general terms the timetable for a circumnavigation is a fixed one and it is not open to discussion with the various sponsors or the client for the main advertising contract. Every effort will be made to agree to the different wishes of the main advertising client but in the end, mother nature is in charge of both when and to a lesser extent where the tour can go.

This is a very easy way of finding different destinations and calculating distances.
Note: The still air range of a Skyship 600B with ferry tanks is about 2000 nautical miles and about 3750 with Centurion diesels. 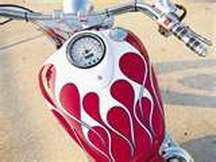 Message from the chief engineer of Skycruise about a ferry tank used during the flight to Athens for the Olympics:
Hi Trevor
We used just one fuel bag for the London to Athens, the bags are originally made for diesel, originally used for long range boat fuel bags, but the enterprising owner decided to try aviation as well. The bags are perfectly good for Jet A1. We were a little concerned when we used them for AVGAS but apart from some minor odors it was fine. The bags can be made fairly quickly to any size and the company is an Australian company, called Turtlepac. (Note: the Centurion diesels use Jet A1 not Avgas)
http://www.turtlepac.com/photo-gallery/category/4.html
Check out the web site including pictures of our installation, we used a 264 gal model off the shelf, but we could have easily fit two into the gondola. With some planning I’m sure we could have used bigger ones, it was just the size they had which was good for our needs at the time. 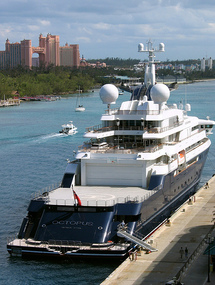 If you want the press that visit an airship operation kept happy they need to be kept comfortable, which is important as uncomfortable reporters are more likely to post a negative article. This is rare but it has happened and only seems to occur when they are not looked after correctly.
The luxury escort vessel is an ideal base for visiting press, with excellent internet connections, a top quality Wescam system with live microwave feed from the helicopter and hot and cold running everything to keep them comfortable.
This type of PR and press host service is normally paid for by the main advertising client, but the importance of such an escort vessel should not be overlooked if a Westbound trade winds or longer trans India Eastbound route is selected.

The Skyship 600 has vectored thrust and can hover fairly accurately above a vessel that is underway in particular. A long line can them be used to pick up fuel cans off the aft deck. This might be required a few times during a Westbound South Pacific crossing as the still air range is about the same as the distance from the Galapogos Islands to the French Marquesas. Some hot food would also be well appreciated by the flight crew.

THE WORLD HARMONY AIRSHIP TOUR ( The WHAT ) 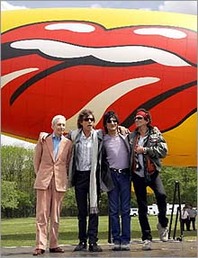 A more realistic name for the DART would be, the WHAT, partly because the theme and image of the tour could be very musical, according to the wishes of the company that signs the main advertising contract for the envelope branding. This name for the world tour can also help project an image of unity and racial harmony, with ground crew selected in different countries to give a UN image of the people involved.
During the course of the circumnavigation, there will be stops where there is little or no flying to attract the press or entertain the local people. About half of the ground crew can be recruited because they have skills other than security watch or pulling on a rope. One suggestion I got was to recruit some Elvis impersonators from different countries. When the airship is grounded waiting for the weather to change, or the mast at the destination to be set up, the media show must go on with entertainment from invited artists and some of the ground crew. Don Hartsell of the World Sky Cruise (www.worldskycruise.com) correctly stated that an airship tour should be more than just about airships, it should also be entertainment.
Many of the crew will also be skilled in both online and photographic terms, so they can assist in providing video or advertising blog site news to keep the story alive, whilst waiting for good weather for the next long sector.
Picture: The Rolling Stones 09 tour in front of their blimp.
RETURN TO AIRSHIP & BLIMP CONSULTANT: www.hybridairship.net
GASBAGS LTA COMEDY SITE:  www.hybridblimp.net
Search Engine Submission - AddMe